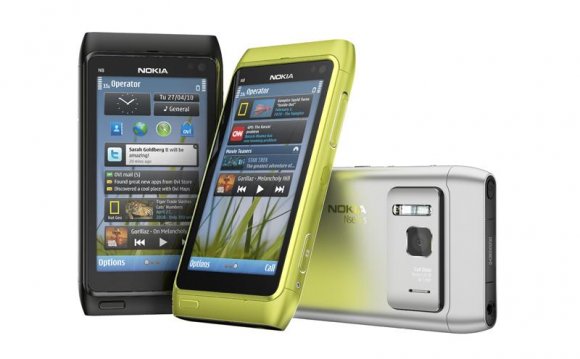 As you might expect, the N8 features an accelerometer and the home screens (all three of them) are viewable in landscape mode. This is the current build of Symbian^3. As you can see it looks a lot like the last version of Series 60 v5 (installed on the N97 amongst others), and most of the menus and options are in the same places as before, but the big difference is in how it works, rather than how it looks.

For starters, every menu we saw ran as smoothly as you would expect on an iPhone or similar. All menus scrolled with the same fluid, kinetic scrolling action without any hiccups. Instead of relying on an on-screen menu button. Nokia now makes use of a long-press touchscreen gesture, which brings up a list of context-sensitive actions. We also saw multitasking in full flight, with a new visual thumbnails view for switching between active apps.

Here is a feature of the N8 you've probably heard a lot about already, the 12-megapixel camera with Carl Zeiss optics. We had a chance to take a few quick snaps during the interview and we were very impressed indeed. The shutter is extremely fast for a mobile phone camera and the photos looked exactly as they did through the viewfinder before we snapped them — no nasty surprises.

Seriously, a phone with HDMI is like a Jedi with a lightsaber, it's exactly what we want to see. Most of today's demonstration was conducted using the HDMI-out cable and a flat panel TV, and while it's not particularly exciting to see the phone's home screen on the big screen, once we started watching HD videos our jaws slowly began to drop.

Nothing out of the ordinary here, but the side-on view is a nice one to examine the N8's unique lines.

If there is one aspect of the new Symbian system that we were hoping had been improved significantly, it's the browser, and to be honest there isn't too much different to note visually at this stage. That said, we were told we were using a build that was 70 per cent of the final release version, so perhaps the browser will get a spit and a polish somewhere in that final 30 per cent of work.

Anything you can do...

One of the features we saw in the interview that we hadn't seen before was another bundled accessory to be sold with the N8: a USB connector. This has to be one of the simplest, yet more important improvements we've seen lately. With one plug you can connect a thumb drive or even a 1TB external hard disk and transfer files across to and from the N8. You can also stream media using this cable, and when you match that with the HDMI-out cable you have a veritable living room media player in your pocket.