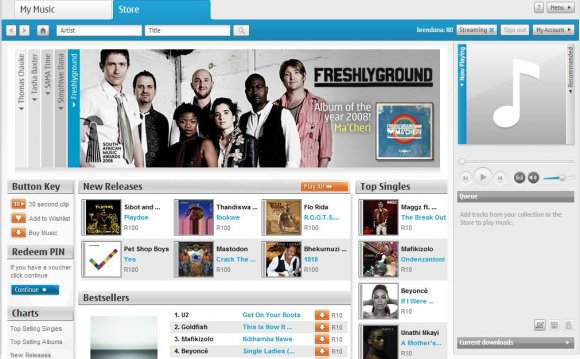 Tuesday morning’s news that the iTunes Music Store was now available in South Africa (and 55 other markets including India, Russia and Turkey) was not unexpected. Its availability in South Africa has been strongly rumoured for months.

Yes, Nokia Music has been around for a few years now (I have used it often, especially for more obscure or local music), but iTunes is different. iTunes is the core of the Apple iOS and OSX content ecosystem. It’s baked into iPhones, iPads and iPods. That makes Tuesday’s announcement massive.

Let’s assume there are over 1m iPhones and iPads in South Africa (there are); and let’s discount iPods for the moment. The majority of the owners of these devices are the very target market record labels are after – people who spend money on music. Or, put another way, people who are willing to spend money on music, but who probably haven’t bought a physical album in a few years.

iTunes Match is possibly the hidden gem in Tuesday’s announcement. For a R199.99 annual subscription, Match will scan your music library and make it available in iCloud (for playback from any of your devices). Any music you own that’s not in the iTunes library (likely to be mostly obscure stuff) can be uploaded to Match for you to access.

Licensing. Looking through the announcement from Apple, one will find that the 56 new countries are all frontier markets… all beyond the obscure Eastern European countries, random South-East Asian ones, and most of South America. To get into these obscure (‘frontier’) countries, Apple needed to sign regional licensing and (local) content deals with record labels, not a trivial process. Also, it’s no accident most of Africa is included in the 56 countries. Music rights are most often divided up as “Sub-Saharan Africa” by the suits in London.

The availability of games in iTunes remains a confusing nightmare. Current legislation means that games have to be submitted and classified/rated by the Film and Publications Board (FPB) (yes, the same people who classified The Spear). But, the FPB has allowed distributors to keep distributing content while it finds a way to regulate it. I’m not surprised Apple hasn’t taken a chance.

But the good news is the FPB has been “working on a system” to allow such content to be sold without being (re-)classified here. More on the nanny-state quagmire here.

Movies will come in time. This, too, is a licensing issue. In fact, of the 56 countries getting the music store on Tuesday, Russia, India, Indonesia and Turkey are getting movies too. There are well-placed rumours circulating that we’ll see movies appearing in the SA iTunes store sometime next year.

What about rival streaming services?

There’s still a market for Simfy and other subscription-based music streaming services. In fact, some would argue that the market has moved beyond owning music and that ‘renting’ music via a subscription service is the future. It probably is. What if we think about music in the same way as we do a utility (see The Future of Music: Manifesto for the Digital Music Revolution)? I bought this book seven years ago and it’s truly astonishing how ahead of its time it was.

Wonder why has been carefully and deliberately reducing store numbers and managing its margins over the past three years? Look at the now defunct Virgin Megastores worldwide and the possibly soon to be defunct HMV in the UK… CD sales have cratered, DVD sales have cratered. Expect the availability of iTunes Music Store in South Africa to hasten Clicks Group’s ‘rightsizing’ of Musica.

What about artists, record labels?

Ironically, artists win. South African artists now get exposure to that market of consumers who have Apple products – their target market. Many of those consumers haven’t bought an album (including those by local musicians) for years, simply because there’s been no easy way to do so. Some savvy users have used the US iTunes Store to buy music, but going that route has prejudiced our local artists.

Record labels (most of whom fought Apple tooth-and-nail a decade ago) win. We spend more on music. And, given that digital albums are at least 30% cheaper than their physical equivalents, we really win (this isn’t unique to SA or to iTunes).