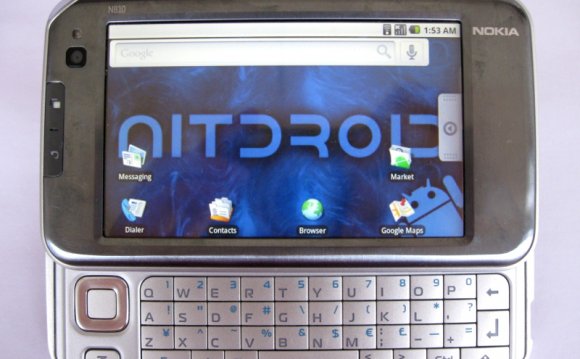 Like quite a few KDE community members who attended Akademy 2008, I got a Nokia N810 internet tablet. Sadly, shortly after we got the devices we stopped receiving OS updates and the Maemo Diablo platform was basically abandoned in favor of a bigger better faster and quite different Maemo Fremantle, to be used on the N900 with the hope of eventually having a community supported port for the N810. Unfortunately, the Mer project, which aimed to bring as much Fremantle as possible to the N810, was cancelled back in 2009, leaving N810 owners with a nice piece of hardware and a dead software stack.

Don’t get me wrong: while the browser is still slow as molasses and the battery drains quite quickly when WiFi is on, Maemo Diablo works, but it’s not moving and in 2011 it’s not fun any more. Lately I’ve been using it just as a music player and rarely for quick note taking or Skype over WiFi.

So thanks to the efforts of the Nitdroid project, I installed an Android 1.6 Donut build on my N810, hoping to get something fun to tinker with. Even though Donut is old, it might still have been an improvement over Maemo Diablo. From what I’ve picked up, the Nitdroid project is focusing on the N900, and I can testify that Android on the N810 is unusably slow.

I have managed to open Planet KDE on my third attempt, the first two times stuff just crashed randomly: