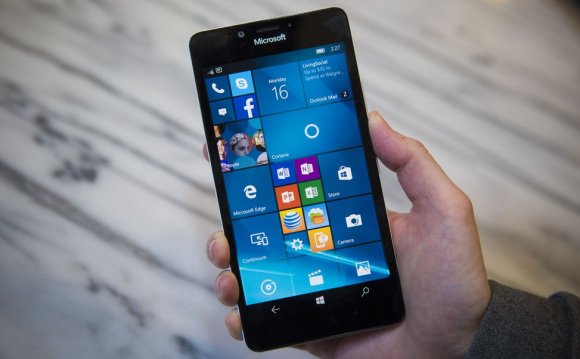 Simply put, Nokia’s latest Windows Phone, the $200 Lumia Icon for Verizon, is solid. It's solidly built, and sits solidly atop all other available Windows Phones. And, yes, it even ships with a solid app lineup, with most of its software bearing the Nokia name.

Nevertheless, for a phone whose legacy includes the 41-megapixel Lumia 1020, the Icon suffers one flaw that should give you pause: noticeable shutter lag of more than a second from the phone’s 20-megapixel sensor. Although the Lumia Icon includes a wealth of manual settings within the Nokia Camera app—along with a nice mix of associated creative software—none of it matters if you can’t capture the original shot.

The Lumia 1520 (left) towers above the Lumia Icon.

Aside from the terrible shutter lag, people with smaller hands will find the Icon a noticeable step down from the Lumia 1520, Nokia’s 2013 phablet, but in the best possible way. While the Icon shares the 1920x1080 resolution of the Lumia 1520, it’s much smaller: 5.39 inches by 2.79 inches by just 9.9 mm (0.39 inches). The 1520, meanwhile, is a 6-inch device. Shrinking the display size produces a corresponding increase in pixel density to 441 pixels per square inch—that's 35 percent more pixel density than the iPhone 5s’ “retina display." The Icon is small enough for most people to traverse one-handed with just a thumb, tracing the phone's Gorilla Glass 3 from edge to edge.

As noted above, the Icon feels solid. It's a mix of polycarbonate and metal that weighs 5.86 ounces, or 20 percent less than the 1520. I would recommend a case, however, as even the matte finish still won’t stop the Icon from slipping from a careless palm.

A combination of metal and polycarbonate gives the Icon a solid feel./

The Icon’s 2.2 GHz quad-core Snapdragon CPU is identical to what you’ll find in the Lumia 1520. In the newer phone, it launches and runs apps in a snap. It’s a sealed phone, so there's no slot for removable storage, but the 32GB of internal storage is supplemented by 7GB of free OneDrive cloud storage. As far as battery performance goes, the Icon survived 7 hours and 50 minutes of continuous video playback during our homegrown rundown test.

Besides the size, the other noticeable difference between the 1520 and the Icon is the newer phone's OLED display, which offers deep blacks and high contrast ratio. Outside, you shouldn’t have any problem reading the Icon’s display, even in full sunlight. And like earlier Nokia phones, the Icon’s display includes Sunlight Readability Enhancement and High Brightness Mode, two features specifically designed for outdoor use. The difference may be slight, but web pages and other white backgrounds do look better rendered on the OLED screen.

Shutter lag has long been a bane of smartphone cameras, but the most recent handsets from Apple and Android manufacturers have licked the problem. But not Nokia. The Icon suffers serious shutter lag that's painfully out of step with modern standards.

In fact, I noticed lag of up to 1.5 seconds while shooting. (I took pictures of a stopwatch app on another phone, timing the shutter to increments of 10 seconds, then recording the results.) From focus to shot with the flash off, I noticed lag of 1.3 to 1.5 seconds. That's on par with a Lumia 928 that I tested against. An HTC 8X Windows Phone produced lag of about 0.5 seconds.

Much of the Icon's lag can be eliminated by pre-focusing the camera. You simply depress the camera button half-way—though this forces you to anticipate you next shot. Otherwise, the Zeiss optics (f/2.4, wide angle lens, with optical stabilization) generally performed well in terms of image quality, although with a bluish cast to some of the photos. Naturally, the phone records 1080p video at 30 fps. A front-facing selfie camera grabs 1.2-megapixel photos.

I've included some sample photos below, which you can click to view in detail. In each case, I've compared the Icon's camera output to the output of the Samsung Galaxy Note 3 (when you click, note that Samsung images appear on top; Nokia images appear on the bottom). In every case, I used default camera apps, and all settings were left at “auto."

Plus some other shots:

From a productivity standpoint, Windows Phones win bonus points simply by including the suite of mobile Office apps, although editing and especially creating documents can be next to impossible on a small, mobile vehicle.