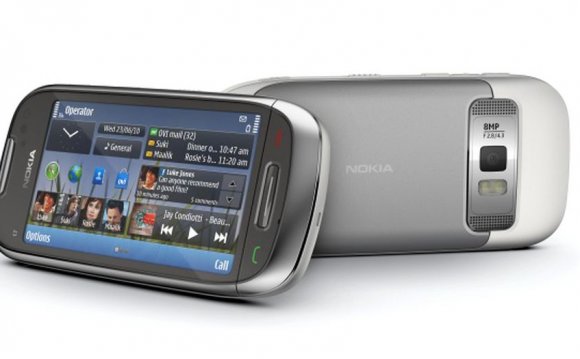 Nokia also developed Series 90 atop Symbian, shown on the following pair of sci-fi-looking PDAs: the Nokia 7710 and (bottom) the Nokia 7700. SonyEricsson and Motorola’s UIQ flavour of Symbian also skinned the OS with icons designed for portrait-oriented device and softkey inputs, such as the Motorola M1000 (below). MOAP(S) was another platform developed on top of the Symbian OS, which was used by Asian mobile makers including Fujitsu, Mitsubishi and Sharp. Here’s Fujitsu’s Symbian-based F-022 clamshell handset.

Caught Out By Capacitive Touch

Symbian’s clear run extended right through to the mid noughties, as Nokia pumped out a steady stream of candybars, flips phones and other weird/wonderful form-factors from cylinders to spherical squares, all powered by its various flavours of the OS. This was Symbian cooking on gas.

The crunch time for the OS came when Apple’s iPhone arrived in 2007 to usher in the capacitive touchscreen era, putting a new more fluid touch-centric user experience at the fore and elbowing out keypads, Qwertys and fiddly menu systems that relied on wielding a stylus to navigate. The iPhone’s arrival was of course compounded by Android’s debut in 2008. Soon a whole army of touchscreen iPhones and iClones were crowding into a mobile playground that had formerly been Nokia’s and Symbian’s to rule.

Unlike Symbian, these incoming platforms were starting fresh — designed for the Internet era, not the quaint pocket PDA. They didn’t carry legacy baggage. Their only heritage was connected computing. They were built with the touchscreen at their centre, and they offered a perfect platform for delivering apps. Of course Symbian could run apps too, but all the various flavours of the OS meant its app ecosystem was far more fragmented than its rivals. And although Symbian’s PDA roots incorporated touchscreen tech this older generation of resistive screen tech — which went hand in glove with fiddly drop-down menus designed to be pecked at with a stylus — bore no relation to modern touchscreens that focused on fingers and true touch computing.

All these factors gave Android and iOS a huge advantage over the decade-old Symbian platform. Symbian was stuck in its own folder-strewn rut, desperately needing to evolve to compete in the slick new mobile world order. Add to that, Android was free for mobile makers to use vs Symbian’s licensing fee model. Symbian was being outgunned and outpriced. A crushing combination for any long-in-the-tooth technology.

Nokia, the main Symbian user ergo the company with the most to lose as the OS fell behind, made the decision to open source Symbian in 2008 to try to accelerate its evolution to compete with its younger and more agile rivals. A rebooted version of Symbian designed for a touchscreen era was to be created by merging various platform strands — including S60 and technology from UIQ and MOAP(S) — to be pooled into a new unified touch-focused platform.

The first touch-enabled release of the new OS, Symbian^1 (or Symbian S60 v5) — is shown below running on the first device to carry it, the Nokia 5800 XpressMusic, released at the end of 2008.

But the usability gap between Symbian^1 and its upstart rivals remained a gulf. It wasn’t until Symbian^3 (demoed below in a Nokia promo video) that a more fully-featured touch-centric experience started to emerge. Although, at this point, development work was already pushing into 2010 meaning Symbian continued falling further behind.

Having a website on the Internet has now become important both for individuals and for companies. A good website will help you develop your business, it will attract new customers, it will help your ideas reach the maximum number of people. But in order to create a website, you have to be a professional. It's not about you? Then contact the professionals for help! WebsiteBigbang is what you need. You'll get high level service at reasonable prices. Contact the experienced team of BigBang to create the website of your dreams!