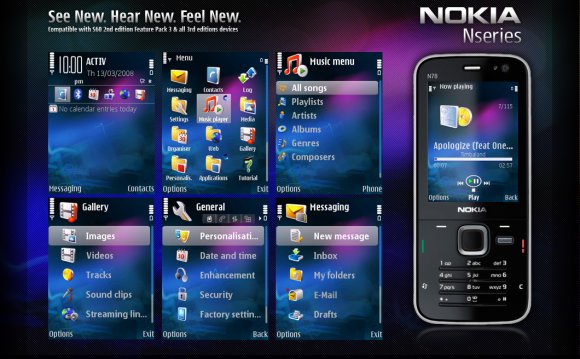 Telephony is fine as always

Signal reception in Nokia E51 takes us back to the good things in this handset. It is just what you would expect in a no-nuisance business device. The loudspeaker is also good, with vibration strong enough to make sure you never miss an incoming call or message. The phone offers excellent in-call voice quality, sound is very clear without any interference.

The ringing volume of Nokia E51 is quite standard, judging by our lab tests, and offers almost the same loudness as Nokia E50. It's worth noting though that the Nokia E51 ringtones do sound loud, crisp and rich, and with them the E51 seems to perform a lot better than with other ringtones. With them the E51 scores Very Good, instead of only Average. Subjectively, we really liked the mellow sound of the Nokia E51. It's not a surprise that it doesn't score much on the loudness test, however we really liked the mild and rich way it sounds in almost all scenarios.

With Nokia E51 any sound file can be used to indicate an incoming call, as long as it's any of these formats: MP3, AAC, eAAC+, WMA, AMR-NB, and AMR-WB.

Here is how Nokia E51 ranks among some of the other handsets we have measured in our loudspeaker test. You can find more information about the loudness test itself here.

Nokia E51 runs on the Symbian 9.2 OS with Series 60 3rd Edition user interface. The added Feature Pack 1 is no news for Nokia smartphones any more but still deserves mentioning.

The phone's main menu has only two view modes, both well known: a 4 x 3 grid of icons and a list. As already mentioned, navigating the menus is fast, with instant response to key presses.

The blue circle next to the icon of a running application is a well known Symbian indication reminding users to quit unwanted applications that are still running in the background. Thanks to Feature Pack 1, the days when there was only a single alarm slot and the voice recorder was limited to a miserly minute are now long gone.

The active stand-by display is a well-known feature of Symbian handsets. It's a nice and convenient way to bring shortcuts to all your favorite applications to your home screen. You can even assign shortcuts to websites of your choice for quicker access.

The two soft keys' functions can also vary. Unfortunately, the current track is not shown on the active stand-by display which is a trademark feature of the N-series phones.

Default standby and the one with mail account displayed

The user available memory is 130MB, which is a substantial figure in all cases. Still, the microSD card slot is there to meet the higher storage requirements with up to 4GB cards supported.

As with any Symbian phone, there is a built-in voice command system. It is doing a good job for native English names, but it handles non-English names a lot less smoothly.