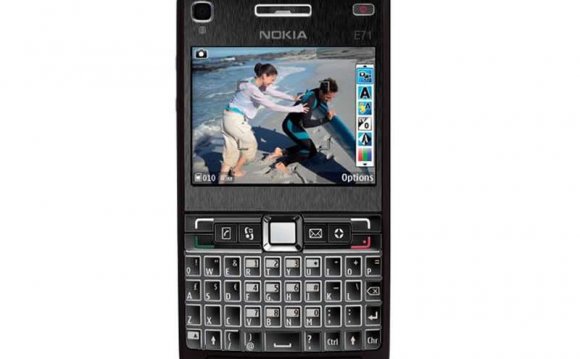 Menu of the Nokia E71 handset

Nokia also chose Symbian as the operating system for the Nokia E71. Usually, this is the standard for the corporate E-series and the popular N-series of Nokia. The version used on the E71 is Symbian S60 3.1 Edition. The disadvantage of Symbian software is that it unfortunately tends to slow down the cell phone, which is what we experienced with the Nokia N96 for example. Surprisingly, the Nokia E71 doesn't suffer from any delay, the mobile phone works fast and smooth.

The menu has become more straightforward and simple when it comes down to graphics, which might be why it is faster. The structure and use of the E71 menu is similar to other Symbian mobile phones. The menu works via clear icons. In addition, installing external software is also enabled. New is the dual desktop; one for business use and one for private use. Backgrounds and shortcuts can be adjusted and added. Pressing the button on the main screen once changes the desktop. A nice addition!

T he Nokia E71 supports voice aid. Not only voice dial, as we know from many mobile phones; the E71 offers a fully spoken menu. Recent calls, contacts and, for example, the time are read out loud. This menu is available at instruments and is very convenient for someone that is visually disabled. At the same time however, I doubt whether the Nokia E71 mobile would be a convenient phone for this person.

The Nokia E71 phone features an integrated 3.2 Megapixel digital camera. Furthermore, the mobile phone also has a LED flash at its disposal, to enable shooting pictures in badly lit circumstances. The monitor is quite large and entirely used as viewfinder. The camera is quick in capturing a picture and the application start-up time is fast too. After capturing the picture it is not reproduced completely sharply on the screen which is rather annoying since it makes you think that you failed in capturing the object.

Taking pictures with the Nokia E71

In some cases the pictures turn out well, although certainly not always. If there is insufficient environmental light, the pictures become blurred very fast and they show a lot of digital noise. It is almost impossible, even in close-up mode, to capture an object from close-by. The camera does respond extremely fast, however, it seems like it skips focusing. In case of correct exposure and a larger distance, like a building in broad daylight, the pictures turn out reasonable. The camera leaves a lot to be desired and it is clear the camera did not have priority on this phone.

B esides being a smooth business mobile phone, the Nokia E71 also features various multimedia applications. Media contains Realplayer, the camera, Musicstore, picture gallery, voice recorder and a Flash player. Music and video are perfectly reproduced on the E71. The media player looks fine and neat. The monitor is not that large, but is instead quite wide and this is very convenient for video files, since nowadays many wide screen films are available. The built-in speaker delivers a nice sound however, to fully enjoy your music, you ought to use the included stereo headset.