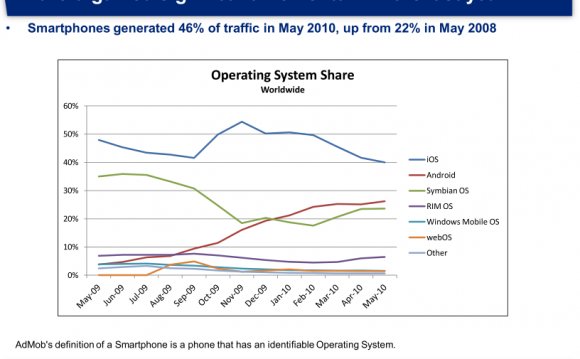 Nokia chief executive Stephen Elop, left, and Microsoft boss Steve Ballmer announcing in January 2011 that the Finnish firm would use the Windows mobile system in its handsets. So why not Android? Photograph: Luke Macgregor/Reuters

(That slightly sour jibe led to .)

But what, precisely, was wrong with Android in 2010? Elop expanded on this at a round table with journalists including the Guardian and other European papers. The question: did he ever regret not choosing Android as the platform for Nokia's post-Symbian smartphones?

"I'm very happy with the decision we made, " he said. "What we were worried about a couple of years ago was the very high risk that one hardware manufacturer could come to dominate Android. We had a suspicion of who it might be, because of the resources available, the vertical integration, and we were respectful of the fact that we were quite late in making that decision. Many others were in that space already.

"Now fast forward to today and examine the Android ecosystem, and there's a lot of good devices from many different companies, but one company has essentially now become the dominant player."

This, he continues, becomes important in negotiations with carriers - who are the gatekeepers to getting a phone in front of so many people, especially in the US.

"Strategically that's important for us [to be offering an alternative OS] because having a conversation with [chief executive] Ralph de la Vega at AT&T, the first step in the conversation is the recognition that we're not Apple, we're not Samsung/Android - used to be Android/Samsung, it's actually about Samsung now - we're a third alternative.

"And as an operator he wants to negotiate with different people and keep pressure on everybody and have the best range of options, he wants that third alternative. So strategically we have an opening with AT&T and every other operator in the world - because we've taken that path as the third ecosystem.

"Now, it's hard - it's very difficult because we are starting as a challenger, we're having to build that credibility; but with partners like AT&T we're gaining that traction . But it was the right decision. You look at a number of other Android providers right now and they're in a tough spot."

Whether Windows Phone has definitely staked its claim as the third ecosystem ahead of BlackBerry should become clear on Thursday, when Nokia will announce its second-quarter results. That will bring figures for handset shipments. In its latest quarter to the end of May BlackBerry shipped 6.8m handsets; if Nokia can beat that (and the forecasts from analysts are that it has: they're putting the figure at between 7m and 8m handsets) it will begin to have credibility as the third ecosystem. Certainly there will be more Windows Phone 8 handsets out there than BB10 handsets; however there could be some way to go to beat the 75m BlackBerry subscribers worldwide, as Windows Phone has only shipped about 30m handsets in total.

But for those who were wondering why Nokia didn't go with Android, Elop's reasoning is pretty clear: he and his team reckoned that Samsung would be well-placed (because of its manufacturing capability and history in the mobile space) to dominate, which would leave no room for anyone else.

They've certainly been proved right - HTC's figures show continuing falls in revenue despite the critical plaudits for the HTC One. It's impossible to know, of course, whether it was the right decision - but at least we know why it was made.