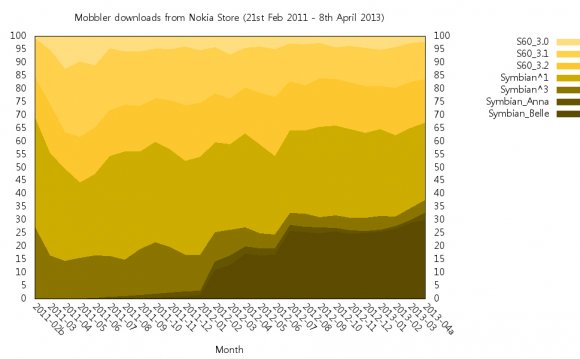 In August 2008, Helsingin Sanomat journalist Lauri Malkavaara wrote the company saying that while Nokia had established itself as a maker of easy to use phones, its latest models were confusing and frustrating.

Malkavaara described the Symbian-based Nokia E51 as being the third cellular phone he had ever owned. But unlike earlier cellphones from Nokia that "were very easy to use" and "no manuals were needed, " the latest model lacked either quality.

"I have wondered about it for a week now, " Malkavaara wrote of the E51's Symbian interface. "At first I did not even know how to call with it without the manual, and I still do not understand very much of it." He then issued Nokia a grave warning about its ability to compete with Apple's new products.

"I ordered my own iPod touch, turned it on, and knew immediately how to use it. I have used the device now on a daily basis for over six months, and I have not even thought about any manuals. The logic of the device opens up right away. It is no wonder that it is a huge success all over the world."

He then described the inscrutable difficulty of navigating menus on Nokia's Symbian phones to try to figure out how to accomplish the most basic of tasks, from setting a ringtone to sending a text message.

Malkavaara concluded, "By putting a telephone like the E51 onto the market, Nokia has squandered its most important legacies: to produce telephones in such a way that they are easy to use. This will cause problems for Nokia."

In response, he stated that Nokia promptly followed up the next day, noting that "Nokia bosses started calling me, wanting to explain Nokia's strategy."

He explained that he wasn't interested in reporting on on Nokia's strategy, but had simply intended the feedback as something for the company to consider internally. One "unyielding" executive, he wrote, pushed to have a conversation about the subject, resulting in plans to meet and discuss the matter.

After growing agitated with the executive's efforts to explain that different people "need different kinds of telephones, " Malkavaara replied, the kind of person who wants to use a bad telephone does not exist."

Nokia knew Symbian was not competitive

In confidence the executive then relented and explained that the company was fully aware of the problem, apologizing that that Nokia had produced a bad telephone experience. He then described a top secret project within Nokia to develop a new operating system intended to support new kinds of phones that would be easy to use.

Nokia had been closely following Apple's 2007 launch of the iPhone, and had expedited "a large number of iPhones to Nokia's head office in Espoo" by courier at its release. The executive described taking one home and presenting it to his four year old daughter, who "learned to use it immediately."

The executive noted he "knew Nokia was in trouble" when the young girl asked him that evening, "can I take that magic telephone and put it under my pillow tonight?"

Android wouldn't become popular for another year, during which the parallel collapse of Blackberry at Verizon Wireless at the hands of Apple's iPhone prompted Verizon to abandon the Blackberry and instead back Android as an iPhone alternative through 2010.

By the end of 2010, weak sales of Android had also demonstrated that platform to be incapable of driving iPhone-like demand, prompting Verizon to partner with Apple on the iPad, followed by iPhone 4 early in 2011. Apples iPhone rapidly became Verizons top seller.