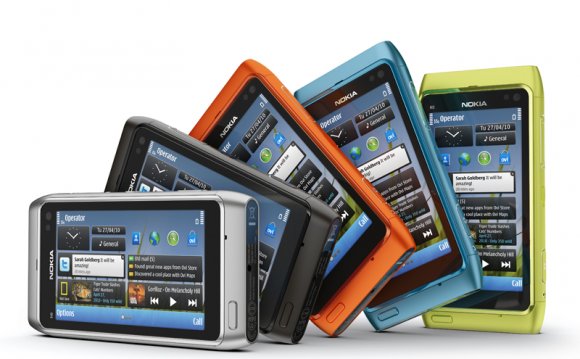 Nokia invented the smartphone. It then went and re-invented the smartphone, insisting the enterprise/corporate oriented business phone should be replaced with a bigger market of consumer smartphones (and they were right). And Nokia introduced a gaming oriented app store, bypassing the carriers - something that was the prototype for Apple's App Store (and were again right, but too early). They offered a touch screen smartphone two years before the iPhone. Nokia offered the world's first phone to do the real internet, and they offered the first smartphone outside of Japan to offer WiFi. They brought cameras to enterprise-oriented business phones. And Nokia was the first smartphone maker to boldly claim that a smartphone was a 'real' computer (also now held as mantra by all of the six big PC makers, starting with HP and Dell on down).

(After several Twitter discussions after I had posted this blog, I returned to add this paragraph on the alarm level) - We have just received Nokia Q4 quarterly results for 2010. I wrote a blog about the numbers. Here are the big picture facts. For the first half of the year 2010, Nokia grew rougly as fast as the industry. It ended year 2009 with 39% market share in smartphones. At the end of Q2 it had 39% market share. Then in Q3 and Q4, suddenly - catastrophically - Nokia growth slowed to anemic, for the first time for as long as I can remember, Nokia's quarterly growth was the slowest of any of the biggest 6 smartphone makers, and far slower than the industry. Nokia's market share crashed to 33% after Q3 and down to (about) 28% after Q4. In six months, Nokia destroyed 11 points of market share - it abandoned one quarter of its total market - in half a year! This reminds me of the disasterous suicide-ride that Motorola embarked upon, but even in its worst period, never did Motorola lose a quarter of its market share in any six month period. I don't mean this is the end for Nokia, but the signs are very dangerous, if two quarters have already gone like this, the cause is no freak accounting error or component shortage, it is a major systematic problem that has to be corrected immediately before Nokia finds itself ranked 3rd or 5th or - like Motorola which went from 2nd to 9th in all mobile phones (smartphones and dumbphones combined) in only 4 years. Right now the Nokia market share is not in decline, it is in a dive. That is why I am writing this blog.

So lets go back a little. In the year 2006 Nokia produced more than half of all smartphones sold on the planet, was by far the biggest total handset maker in the world and was making tons of profits along the way. It had astronomical customer satisfaction and loyalty, and Nokia's phones were all known for great usability. Nokia also was known for incredibly reliable phones (a dog ate one, it emerged 'through' the dog later, and was fully functional still, if perhaps a bit smelly, that kind of stories). And inspite of this, Nokia also sold some of the ultra-cheapest Africa phones on the planet. Then a funny thing happened in January 2007, when a computer maker called Apple decided to release their first-ever mobile phone. A phone so astonishing that even this Nokia-friendly blog claimed it was the first truly transformational phone, that we would measure time in 'Before iPhone and After iPhone' - and others who read that blog, started to claim that Tomi was calling the iPhone the Jesusphone (which I never said). But the world for Nokia did change utterly totally completely. It was the end of the good old days.

FAST OR GOOD OR CHEAP

I am often reminded of my boss early in my career, when I was selling computer networks for a PC networking company on Manhattan called OCSNY. Our CEO, Todd Stevens, would often use the phrase when talking to customers who were trying to bargain with him - that 'you can have it done fast, or done right, or done cheap - but only two of those three, which do you want'. I thought it was a very good lesson for me in understanding the real world impacts of the typical positioning triangle. I have used that triangle often in my workshops with operators/carriers about customer satisfaction, pricing etc.