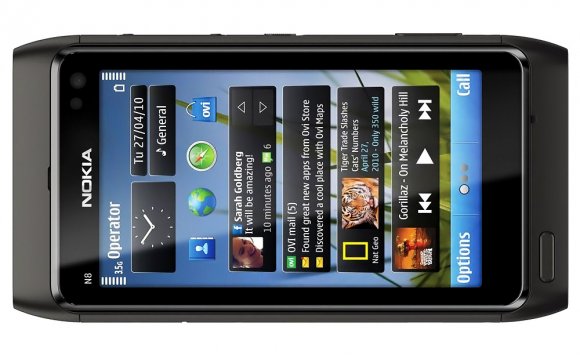 Nokia unveil new N8 : The new Nokia N8 has been unveiled by the Finnish company to be released sometime in August and has the best functionality, specifications and features to date by any Nokia phone.

However the new Nokia N8 is something different and new compared to previous phones by the company and by any manufacturer for that matter.

Considering that the last time the phone giants released anything new was four years ago with the Nokia N95, the latest new N series will boast a 12-megapixel camera, a new operating system and multi touch screen.

The new Nokia N8 has also got never before seen video functionality that even the Iphone will be jealous of. It’s makers are insisting that the video quality are that of DVD quality and also contains Carl Zeiss optics and Xenon flash which is a feet which the Iphone even failed to have.

If we look at the new 12 megapixel camera in a little more extensive manner, it is very easy to say that the phone will even surpass some digital cameras. One thing is for sure and that is the N8 will give you a phone camera experience never before seen.

The Nokia N8 also incorporates a HD quality video recording system which has astonished even mobile phone developers let alone would be buyers from around the world. We all know how much memory HD quality video’s and pictures can take up, which is why the new N8 will have a 16 GB internal memory which can be extended by 48 GB through it’s MicroSD slot.

The phone will also feature extremely high quality games which you can expect to run smoothly with the help of the new Symbian 3 operating system and will be visually impressive with it’s 3.5-inch capacitive touchscreen.

The battery life is also impressive considering the amount of applications that it runs with a. It has a 720 minute (12 Hours) talk time with up to with 6 hours of video playback. It also boasts 50 hours of music playback in the offline mode.

New Nokia N8 Review
The Nokia N8 is a never before seen technological marvel and considering the specifications, can easily surpass the Iphone. But is it coincidence that the Nokia N8 is released at the same time as the new iPhone 4G. Well in the financial market it will be very rear for such things to be by coincidence.

The Nokia N8 is said to be the new Iphone killer but I won’t go into that. The specs and special features of the phone is out there for consumers to decide but one thing is for sure and that is no matter how many new features the phone has, if it’s operating system and software do not run smoothly, it will probably be slayed itself.